Talking Your Clients Through the Impact of the Ukraine War

The Russian invasion of Ukraine has brought disruptions throughout the world—of people, businesses, and financial systems. And many investors are understandably worried.

The fast-moving events surrounding the invasion and the fluid nature of ongoing developments have, above all, created a great deal of uncertainty—and as so often happens, that means that financial professionals may have to step in.

“The current landscape could have profound and long lasting macroeconomic and asset allocation implications.”

"Indeed, we have a hard time imagining a world where Russia is quickly reintegrated into the global economy, or a world where monetary policy quickly gets back to neutral, or a world where global supply chains are not reorganized or strained by ongoing events in China," McVey continues.

For many, a top-of-mind item is inflation and how the conflict will affect it. “The combination of inflation and conflict-driven uncertainty has created a heightened sense of concern for investors,” says Jeff Bush, partner of The Washington Update. He says that it’s important to remember that inflation was occurring before the conflict; Ukraine events may aggravate it, but they are not its fundamental cause. In essence, that moves the issue from the emotion-driven realm of uncertainty to the more familiar and rational, which typically can be addressed with financial planning.

Ukraine-related uncertainty is clearly affecting the price of energy, which is an input to so many other economic factors, including food, transportation, and more. But over time, that is likely to be a larger problem in Europe, portions of which depend heavily on Russian energy. “It shouldn’t be a huge issue here in the U.S. because we only import about 7% of our oil from Russia,” says Bush. He notes that efforts to increase production from the United Arab Emirates (UAE) and Saudi Arabia may also have minimal impact in the U.S. “They seem somewhat open to pumping more oil, but the European Union (EU) will likely be the first recipients of any new production, specifically Germany, rather than the U.S,” he says. 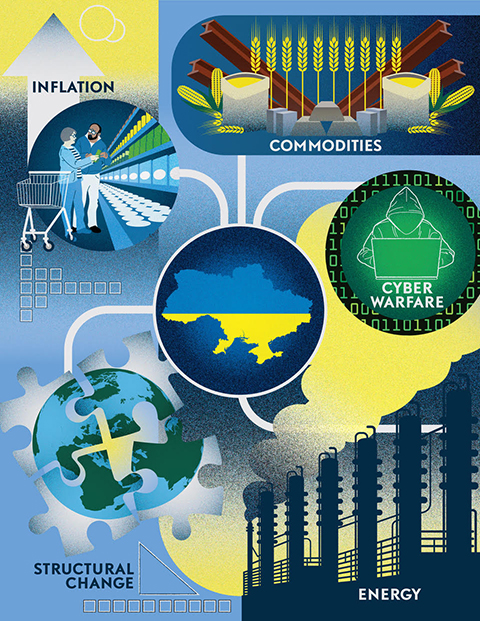 Commodity prices, too, will be affected. Here again, inflation was already at work before the conflict. But with both Ukraine and Russia being large suppliers of agricultural products, food prices are likely to increase. From Ukrainian sources, palladium supplies from Russia may also be constrained, along with aluminum, nickel, platinum, and titanium.

Given Russia’s history with cyberwarfare, many observers have worried about cyberattacks from that country. However, explains Bush, “one of the biggest surprises in the Russian incursion is the near non-existence of cyberattacks.” In part, he says, that may be because “in Putin's thinking, if he is successful in taking over Ukraine, he must have a functioning economy there and at home. The Russian economy has been and will continue to be negatively impacted by ongoing sanctions and the reduced confidence in foreign investments. In theory, if they take over Ukraine, it has to be long-term accretive to the Russian economy, or it’s a net loss.”

Another factor, Bush notes, may be Russia’s significant cyberattacks on Ukraine in 2015, which led the U.S. and the EU to help bolster Ukrainian systems, providing insights into Russian tactics, which were then used to strengthen Western systems. However, all of that is not to say that there won’t be more cyberattacks, and “the cybersecurity risk certainly continues to exist,” he says.

The uncertainty around Ukraine will continue and will ultimately depend on how events unfold. Many observers have suggested that the invasion has started a second Cold War. Barring a significant broadening of the conflict, that seems unlikely, says Bush. But the conflict is changing some fundamental economic and political realities, and, he says, “I believe, at this point, it’s a rewriting the world’s operating manual rather than a second Cold War."

McVey also believes that the war will accelerate a drive towards greater regionalization globally. "More restrictions and scrutiny on the transfer of capital, technology, and data are also likely to occur, as economic warfare becomes an increasingly critical tool in the era of great power competition. Consistent with this view, we expect to witness a further rise of more restrictive FDI (foreign direct investment) regimes and potential for outbound restrictions. If we are right, how and with whom investment managers partner to deploy capital will become a major input in almost any transaction, we believe, on a go-forward basis, as the ‘weaponization’ of economic levers becomes a more prevalent part of the political arsenal."

More broadly, the invasion appears to have united the EU, the U.S., and many other nations to a surprising degree. It has already prompted increases in defense spending in some countries—most notably, Germany. At the same time, the impact on Russia is likely to be long-lasting and negative. “The trust of Western corporations and their ability to do business in or with Russia are significantly diminished and will remain so for a long time,” says Bush. “When someone threatens to take control of your assets and your IP, it dampens your enthusiasm for investing there. Even if there is a negotiated settlement soon, which we all hope for, it will take Russia a long time to recover from this.”

Bush is careful to explain that while he is not an economist, he believes that Ukraine events point to some high-level investing realities that should be kept in mind. “Like any inflationary cycle, I’d look to shorten duration and uniquely in this cycle, I would focus more on domestic investments.” At the same time, he adds, “Watch the U.S. dollar, because if it weakens significantly, we could see a reversion where international stocks, at least in advanced economies, could do better than U.S. stocks. But I am not seeing that anytime soon.”

Producers can employ the familiar strategies of helping clients to stay focused on plans, adjust investments to accommodate inflation, and not make rash moves. “As in any time of uncertainty, it’s about communication and staying in touch with clients, reading where they are, keeping them in the lanes,” Bush says.

He also suggests which clients a financial professional should contact first. “Clients two years before retirement and two years post-retirement should be at the top of the list,” he says. “Math tells us that significant volatility at this point in an investor’s life can have devastating effects on retirement success. If I had a client retiring at the end of the year, I might ask them to reevaluate or remain flexible.” It’s also useful to remember that older clients could have an especially emotional reaction to the idea of a new Cold War. “It brings back those primordial fears they grew up with,” he says.

The opinions expressed are those of Global Atlantic and the contributors as of April 19, 2022, and may not come to pass.

Have clients that may be looking for a strategy that can withstand market uncertainty, inflation, low-interest rates and other factors? Consider a “Risk Reset” approach to their retirement. Click here to learn more. The Impact of Long-term Care on Retirement Planning Why Managing Client Expectations is So Important