Growing Your Asian American Client Base

How building relationships with Asian Americans can benefit producers

Even more than Latinos in the U.S., the Asian American population is diverse both in terms of origin and economic status—and that translates into tremendous opportunity for financial professionals—whether they are of Asian American origin themselves. It also presents challenges that can be overcome by understanding the specific population groups they will be serving. 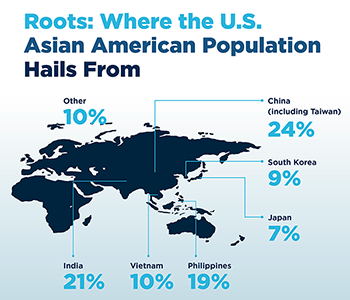 Asian Americans are also a large group, with, according to the Pew Research Center, “a record 22 million [people who] trace their roots to more than 20 countries in East and Southeast Asia and the Indian subcontinent, each with unique histories, cultures, languages, and other characteristics.” Pew projects that this population—85% of which is made of just six groups (see map)—will surpass 46 million by 2060, making it the largest—and fastest growing—immigrant group in the country.1 The Asian American population is also highly urbanized with nearly half (45%) living in the western states.

On the other hand, according to the National Community Reinvestment Coalition, a wealth gap exists between the poorest and the wealthiest Asian Americans, which represents the widest wealth disparity of any racial group in the U.S.3 That fact, noted Phuong Luong, a financial planner and investment strategist at San Francisco-based Adasina Social Capital, in a June 2021 Morningstar article, makes it “impossible to provide generalizable and scalable financial advice for an Asian American audience.”4

Nonetheless, various studies and articles suggest that, regardless of economic status, there are certain common themes and trends within the wider Asian community. These start with saving money.

What are they saving for?

“You don’t need to tell Asians to save,” noted Marguerita (Rita) Cheng, CEO of Maryland-based financial advisory firm Blue Ocean Global Wealth in a 2016 InvestmentNews article about courting the Asian American financial advice market.5 In fact, they are inclined to protect their assets through individual stocks, corporate and municipal bonds, as well as various types of annuities.6 According to Census Bureau Wealth Table and Ownership 2019, Asians hold a high amount of cash, are heavy property investors, and tend to put more in IRAs and 401(k)s. 7

However, as Florida-based senior financial advisor Danqin Fang pointed out in a May 2021 article on how to create financial wellbeing for Asian Americans, “sometimes it’s not clear what one is exactly saving for, or why they need to save.”8

Three areas to consider are education, home ownership, and the ability to send money to family back in their home countries.

The Asian American commitment to education is evident in the fact that more than half of Asians aged 25 or older have a bachelor’s degree or more, compared with 33% of the U.S. population in the same age range.9 Asian Americans represented 13% of STEM (science, technology, engineering, and math) jobs and were the forces behind 19% of high-impact patents, according to Goldman Sachs Research.10

Asian Americans also have a higher homeownership rate, which reached 61.2% in the fourth quarter of 2021, a rate that is higher than other racial groups.11 As a predominantly transnational population with strong immigrant ties, many Asian Americans support older family members at home while sending money to their families overseas. This can have a negative impact on wealth accumulation in the U.S.

Also of concern, as Brooklyn, New York-based certified planner Pamela Capalad told InvestmentNews, is a general lack of understanding about the stock market and investing. To counter this, Capalad suggested “creating a savings account specifically for the family” and helping the family learn “the basics about investing.”

Learn to bridge the cultural gap

Sometimes what stands in the way of seeking financial advice, however, are cultural issues. For example, as Andrew Wang, a managing partner at New Jersey-based Runnymede Capital Management, noted in the InvestmentNews article, estate planning is a topic that Asian Americans tend to avoid because of both superstitions associated with death and out of respect for elders.

This, Cheng noted, actually opens the door for non-Asian financial planners to be of assistance, given that they can offer an outsider’s opinion. When it comes to bridging the cultural gap, she says, “Sometimes being non-Asian can be an advantage.” She cites, for example, the fact that “some Asians in close-knit communities worry about gossip. They might be less concerned about the prospect of sensitive personal financial information leaking out into their community if their adviser is non-Asian.”

Still, opening that door must be done with care. As David Wu, executive director and head of knowledge management for Morgan Stanley, posted on the firm’s Forum for Women, Multicultural and LGBT+ Financial Advisors website in May 2022, “People should aspire to better understand and relate to the background and style of Asian American individuals, rather than trying to force them to fit in.”12 Building on that sentiment, Luong noted that “financial professionals should not assume that Asian American families have similar levels of assets and risk tolerances, or even the same priorities. As advisors, it's important that we deeply understand our clients and their individual goals and concerns.”

And that means, adds a Las Vegas-based financial advisor with a diverse base of both Asian American and non-Asian American clients, when courting the Asian American market, establishing interpersonal trust is paramount before any business discussion or consideration can begin. It’s important, he says, to mirror prospective clients’ manner and tone. “No back-slapping, informality, or assumptions of familiarity,” he says. “Speak quietly, slow the pace, and focus on building a relationship, not pitching products. Working with the Asian American community takes commitment, patience, and a long-term perspective.” Do Your Clients Have Social Security Supplemental Income? How an In-Service 401(k) Rollover Works What are Early Distributions?