How the Effects of Inflation Impact Retirement Financial Planning

In the Wake of Inflation: Retirees Worry About Funding Their Golden Years

With prices rising at record levels in the grocery store and at the gas pump, inflation is top of mind for most Americans right now. But for near-retirees and the recently retired, steadily rising prices create an extra layer of worry and fear about whether hard-earned nest eggs will be large enough to sustain them through their golden years.

Consider just a few recent metrics: According to the U.S. Bureau of Labor Statistics, the Consumer Price Index for the past 12 months in the U.S. accelerated to 8.6% in May, the highest level in more than 40 years. Surging food, energy and shelter prices all contributed to the gain, with food up 10.1% on a year-to-year basis, the first increase to top 10% since 1981, and energy up 34.6%. Core inflation, excluding food and energy, rose 6%, as shelter costs, which account for about one-third of the CPI, jumped at the fastest 12-month pace in 31 years. 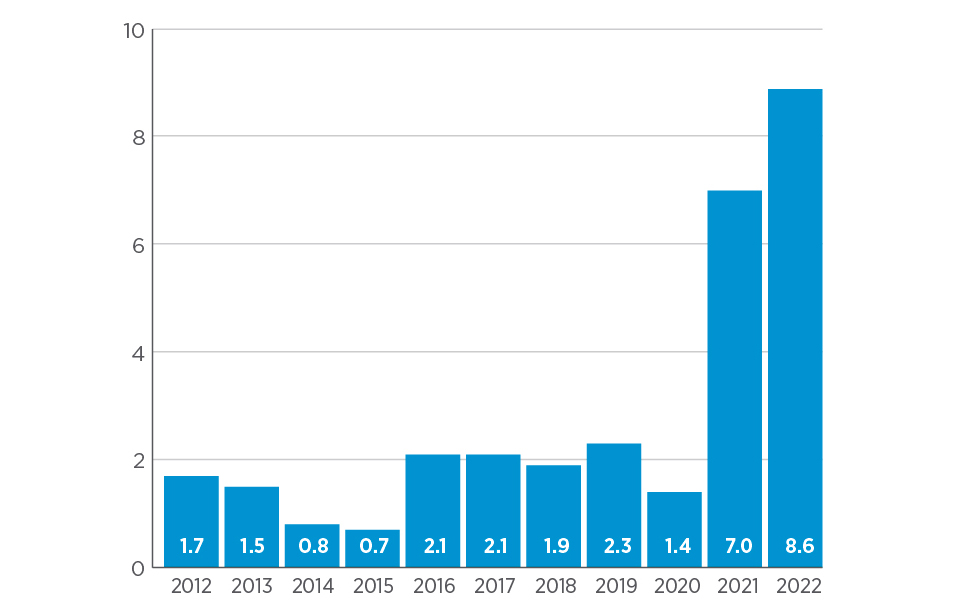 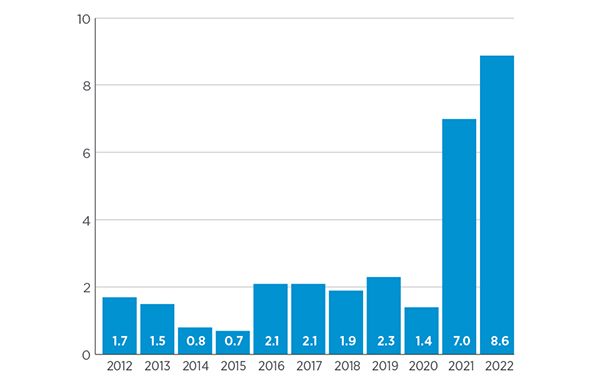 The latest inflation report comes with the Federal Reserve in the midst of a campaign to tighten the nations’ money supply and raise interest rates. While the moves, including an aggressive 0.75-percentage-point rate increase announced June 15, are expected to slow growth and bring down prices, inflation is likely to remain at higher-than-usual levels for much of the year, according to a leading global investment firm KKR, which sees several dark clouds looming over the economy.

“We believe that the pandemic started—and the war in Ukraine has now accelerated—shifts in the global economic system that warrant investor attention,” says Henry McVey, head of the Global Macro, Balance Sheet and Risk team for KKR, the majority owner of Global Atlantic Financial Group. “We’re in a world where the rate of globalization is slowing or reversing, and a new era of great power competition is emerging. This competition is creating new geopolitical tensions, which leads to more uncertainty, inefficiencies, and, in many instances, a higher cost of capital.”

The changing geopolitical landscape—combined with the lingering threat of Covid-19—is having myriad negative impacts, including new stresses on product supply chains. “The pandemic created excess demand for certain products that couldn’t be met, resulting in ‘sticky’ inflation that is hard to get rid of,” McVey says. “It takes time for these constraints to be worked out and, in the meantime, these higher-than-planned prices can cause ripple effects throughout the economy.”

As a result of these and other cost pressures, including labor, housing, and energy shortfalls, KKR has increased its estimate for the inflation rate for the 2022 calendar year from 6.5% to 7.3%. The outlook for a recession developing in 2023 has also increased, with much depending on the Fed’s ability to navigate a “soft landing” for the economy as it introduces a series of rate hikes that gradually raise interest rates and cool off consumer demand in hopes of reducing inflation.

Global Atlantic’s own research confirms the growing concern over inflation. In a survey of 1,000 investors conducted in February 2022, 87% of respondents said they have recently experienced “sticker shock” when purchasing items such as groceries, meals out in restaurants, and travel. The majority said they believe prices will continue to climb at a higher-than-usual pace throughout the year.

“This may be a good time for financial professionals to be proactive with clients and reach out to them to see if they have any concerns regarding inflation and the overall economic picture,” says Cameron Jeffreys, senior vice president at Global Atlantic. “Conversations during these kinds of times are never easy but they may also provide a good opportunity to make needed adjustments that better position retirement accounts for what may be coming.”

A Growing Concern: "Can We Afford to Retire?"

Inflation is also raising concerns about retirement. More than 60% of respondents to the Global Atlantic survey believe low interest rates and rising inflation will make it harder to create retirement income to last a lifetime, and almost 70% are concerned they won’t be able to live comfortably in retirement.

“There are three distinct challenges retirees and those approaching retirement age face with the current environment,” says Jeffreys. “First, the dollars they spend on everyday items are not going as far as they are used to. Second, the S&P has dropped more than 20% from its peak in January through mid-June, so savings they’ve invested in the market have shrunk. And third, the recent rise in interest rates has affected the performance of bonds, so they are not providing the safety net against stock losses that they usually do.”

In such an uncertain environment, financial professionals can play a key role in allaying investors’ fears, Jeffreys adds. “Anyone in or thinking about retirement may want to consider taking a fresh look at their complete financial picture, including streams of income, spending, and investment mixes. Adjustments may be needed in each of those areas to mitigate risk and protect assets and income.”

As part of these discussions, Jeffreys suggests financial professionals may want to review clients’ portfolios to ensure that the mix of investments in clients’ retirement plans is providing the balance needed to weather the stormy climate of market volatility combined with rising prices.

“The right balance of diversification* for new retirees and those close to retirement varies from individual to individual, based on age, assets, lifestyle, and a variety of other factors,” he says. “It includes the basics, such as the mix of stocks vs. bonds, but annuities should also be thought of as an asset class that can help balance risk and reward in a portfolio. Skilled financial professionals can help clients pursue growth while also providing protection to cushion the blow when desired returns aren’t there.”

Virtually all Global Atlantic survey respondents—99%—say protection of assets while still maintaining growth is an important consideration in any retirement plan. In addition, 96% believe guaranteed monthly income in retirement is important—but they worry how that income may be eroded if inflation persists. Ninety-two percent say they would be interested in an investment that could defer taxes and protect principal while providing growth potential.

Annuities offer an effective way to cope with the uncertainty generated by rising inflation, Jeffreys points out. But many people remain relatively unaware of the benefits annuities can hold for retirees and soon-to-be retirees. In fact, 27% of those without an annuity don’t know enough about them to render an opinion on whether they view them as a positive, negative, or neutral, the Global Atlantic survey found.

At the same time, those who own an annuity are overwhelmingly positive. And 62% of those with an annuity say the money they saved for retirement will last the rest of their life.

“Annuities are designed to deliver a sort of ‘retirement paycheck,’  helping to protect savings in adverse market conditions and balancing ones goals and needs in retirement,” Jeffreys says.

While prices for many goods may continue to inch up at higher-than-desired levels for some months to come, most economists don’t expect the current inflationary environment to linger over a long period the way it did during the late 1970s and early 1980s. Still, there are many tough challenges on the horizon, says KKR’s McVey.

“Russia’s attack on Ukraine may only reinforce the notion that security of energy, communications, and data is not only an economic priority but a geopolitical one as well. It also has the potential to reinforce populism, geopolitical rivalry, institutional distrust, and political tumult, all recent trends that have significant long-term economic implications. Against this backdrop, we strongly advocate financial professionals and investors consider prioritizing inflation protection and pricing power by overweighting collateral-based cash flows, including sectors such as infrastructure, asset-based finance, and real estate.”

Those who have just entered or are about to enter retirement are in a particularly tough spot since a market downturn accompanied by persistent inflation can take a big bite out of savings. But “we believe the prudent course of action for many investors in an environment as volatile as the current period is to stick to the game plan,” says McVey.

“Many people, when they don’t achieve their goals in retirement, aren’t following their plan,” McVey says. “They either redeem too soon, or they shift to the wrong fund because they’re nervous.”

Rather than making sudden moves or big changes, McVey suggests investors consider staying the course, if appropriate for their situation, with fundamental, proven strategies such as dollar-cost averaging1 and diversification2.

“We believe in thoughtful deployment of capital and having a solid game plan that, with the assistance of a financial professional, is finely tuned as needed to reflect the investors’ goals and what’s happening in the market,” he says. Answer your clients' questions about cryptocurrency How to navigate ‘choppy’ market conditions The Importance of Financial Literacy